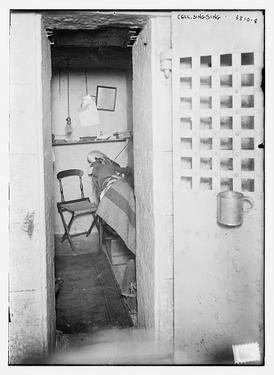 Sing Sing--Prison Cell by Bain News Service (ca. 1910) Taken from the Library of Congress Online Catoalog. [4]
There was a fear of increasing crime and so expansion of prisons and the penitentiary system was inevitable (Gilfoyle 16). George Appo had spent much of his time in prison at Sing Sing and various other jails and asylums.  Many other criminals during this time had also been sent to places like Sing Sing. They were meant to be a means of reform for criminals; to keep them from going back to a life of crime after they were let out. Unfortunately, many of these reforming institutions were reliant on hard labor and even torture. Because Appo's father was also at Sing Sing when he was, news got out and Appo was treated in a way that did not reflect his crime. He was sent to work in the laundry room and was in charge of ironing the new shirts (Gilfoyle 42).

After a short time of working at Sing Sign prison, Appo accidentally scorched a shirt. He was taken to the guard room where he was wrongfully accused of purposely ruining the shirt. The principle keeper decided that a beating was appropriate for the scorched shirt. Appo was beaten in the back with a wooden paddle and was hit so hard that he was knocked unconscious (Gilfoyle 43). This was a common practice among the wardens of the prisons. It was used to discourage bad behavior and encourage proper behavior. Having been beaten for something that he did not intentionally do, Appo went back down to the laundry shop and shoved the shirts he had been ironing into the stove. He was brought back to the principal keeper and sent down to the dungeon. He was kept there for  two weeks with hardly any food or water and when he was finally let out from Sing Sing prison he spent three months in the hospital for his injuries acquired at Sing Sing (Gilfoyle 43). Mistreatment was common in prisons at this time. Appo himself was tortured many times at Sing Sing and other prisons and institutions. One official at Sing Sing Prison,  Archibald Biglin, was also rumored to have raped male inmates (Gilfoyle 45).

While in prison, Appo was employed with many jobs. Working in the laundry room at Sing Sing was one of them, but he also worked wheeling sand, as an assistant tier boy, chopping and sawing wood at Clinton Prison, and making hats under a man named Edward Gay who also used to mistreat the prison workers by assaulting them with a heavy stick when they became distracted from their tasks (Gilfoyle 46). When Appo was released and headed back to New York, he visited the editor of The New York World and told him of the atrocities he had witnessed in prison by the guards. He hinted that an investigation of the state prisons should be conducted. As a result, prison authorities were forced to stop paddling and other cruel punishments that had maimed, killed, and drove many inmates insane (Gilfoyle 47).

In 1895, Appo was sent to Blackwell's Island for stabbing a policeman in self-defense while having an altercation defending his fellow actor from In the Tenderloin (Gilfoyle 93). While at Blackwell's Island, Appo worked as a carpenter making coffins. He lied to the keepers there and said he was carpenter by trade so he could avoid the harsh climate working outside. He was placed in the carpenter shop and worked with another inmate who had shown him how to be a good carpenter so that it would not be found out that Appo had lied to the keeper. Ike Vail, the man Appo was working with, told him, ""Whenever the screw (keeper) comes near our bench, keep sawing wood, any old piece, and I'll square you up with him if he should get next to you"" (Gilfoyle 94). Vail knew what the keeper would do to Appo if he found out that he lied to him, so Vail decided to help him out and by the end of Appo's sentence, he was an expert at making coffins and he had a clean prison record.

When Appo left, however, he did not have any money much like every other time he was let out of the penitentiary. The prison workers who were sent to work in the clothes room often stole the other inmates' possessions such as money and any jewelry or items of value that could be used after release. Appo states in his autobiography that "the convict who is assigned to take charge of the clothes room is very fortunate and the keeper is sure of him knowing what to do for his own interest" (Gilfoyle 94). This could have been the reason why Appo had no money when he was released from Blackwell's Island.

About five months later, after again resorting back to a life of crime, Appo was arrested on suspicion for being on the wrong street at the wrong time. He was assaulted by the officer who arrested him, fought back, and was sent to the Workhouse which was located on Blackwell's Island. After he was there for three weeks, he decided to escape. He managed to execute his plan and made it back to New York.

When he made it to New York he again began to pick pocket on the streets. He was arrested and charged for stealing a gold watch and jewelry. He was sent to Sing Sing prison which was now under the order of a new warden. According to Appo, however, " the discipline was just as severe and brutal" (Gilfoyle 56). But this time was different for Appo; he met and was working with a man named Moran in the stove molding shop. One day Moran, who was serving a ten year sentence, spoiled a flask on accident while working in the shop. He was immediately reported and punished. Upon returning to the shop, Moran, "...took a ladle of red-hot iron an burned half his foot off, and the contractors, Perry & Co. lost a skilled molder as a result" (Gilfoyle 57). Moran would rather burn his own foot off than work another day in the molding shop of the prison. The prisoners were not going to stand for their mistreatment, so they retaliated against the keepers and their punishments in various ways which undermined the keepers' authorities. Moran, for example, severely burned his own foot so that he would not be subjected to the cruelty under the keepers in the stove molding shop. After this happened, Appo spoke to the keeper that was in charge that day and told him, ""As keeper, Mr. Mackin, you are in charge of the convicts to look after their interest and welfare and not as a slave driver for the contractors"" (Gilfoyle 57). Appo, even though he was a criminal, could see that this was wrong and immoral. He pleaded with the keeper to be more fair to the inmates so that they would not retaliate. Appo spoke to Mackin many times after this incident and found that he was one of the better keepers at Sing Sing as he had a kind heart and the men who worked under him saw this, and gave him their best effort and work in appreciation (Gilfoyle 57).

George Appo spent much of his life in and out of prison. It would not be until the late 1800s that he would come to the realization that his addiction to opium and, by extension, his life of crime was something he truly could avoid and leave in his past thus moving forward to a new and honest life.