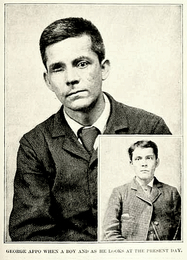 George Appo when a boy and as he looks at the present day by Frank Moss (ca. 1894) Taken from Wikimedia Commons. [2]
Early Life

George Appo was born on July 4, 1856 into a crime family. His father, a Chinese man named Chang Quimbo Appo, had been convicted of manslaughter in 1859 (Gilfoyle 6). Appo states in his autobiography that his father was also a participant of the Gold Rush and had shot and killed two Mexicans as they were robbing his partner (Gilfoyle 35). Appo did not know he had a living father because he was sent to prison when Appo was three. Appo's mother, an Irish immigrant, and his sister died at sea when they were on their way to visit her brother in California (Gilfoyle 36).  Therefore, at a young age, Appo was sent to live with various foster families as his father was in prison for murder and he was considered an orphan. When Appo had turned eleven, his father had been released from prison. He lived with his father for several months until his father was once again convicted of manslaughter and sent to prison (Gilfoyle 37). With his father back in prison, Appo had no choice but to begin selling newspapers on the streets. Many other boys around his age were also selling papers in an attempt to make some money. However, the boys that Appo worked with were doing a lot more than just selling newspapers.

Selling newspapers was not a glamorous job and the pay was low.  Appo did not know when he met these boys that they were pickpocketing or grafting. "...I soon found out that they were picking pockets on Broadway and used the newspapers as a cover to work their crooked business" (Gilfoyle 37). As seen below, it was not difficult to get close enough to someone on the streets to take something from their person, especially when one used the excuse of selling newspapers. Younger boys were often also seen as innocent so it was a perfect cover for their crooked business.

In the years to come, Appo would be involved in much more than just grafting. He met a man named Dolph Saunders. Saunders asked Appo to deliver a letter to a man he was trying to make a deal with (Gilfoyle 75). When Appo reached the hotel in Poughkeepsie, New York to deliver the letter, he was met by Ira Hogshead. Hogshead changed his mind about making a deal with Saunders and when Appo's head was turned, he shot him in the head (Gilfoyle 77). Since Appo was the one that was completing the transaction and not Saunders, Hogshead took out his frustration on Appo. As a result, Appo lost his right eye. In this time, criminals had to stick together. It was much as it is today within gangs in urban cities; becoming a rat is the worst thing a member can do. Due to this, Appo decided not to testify against Hogshead so that he would not be retaliated against by his fellow crooks.

Why was he still sucked into a life of crime?

Appo spent much of his adult life in and out of prison. When prisoners were let go, they were not given the means of  finding employment in order to leave their lives of crime behind. Appo stated in his autobiography, "I tried hard to get work but failed, and in the course of one month, I drifted, through necessity, back to the opium joints and stealing for a living again" (62). Even though Appo was employed during his time in prison, businesses were still not open to the idea of hiring an ex convict. Appo held many different positions at the prisons, but when it came time for him to enter the real world, none of the wardens or prison doctors gave him any recommendations (Gilfoyle 61). Many doors were shut to people like Appo and the same is true today. Businesses did not want to hire ex cons and just being released from prison with no money would lead criminals back to their old lives. The judicial system was focused on the punishment for crime and not the betterment of the criminal. This hurt inmates' chances of making something of themselves after prison in a society that was practicing Social Darwinism. Therefore, due to his opium addiction and no help from authorities or the government, he, like other criminals of the time, went back to his old habits of petty larceny in order to make a living.

While serving time at Clinton Prison, Appo worked making hats in the prison factories. Appo did well finding work within the prison system, but he was not so lucky when he was sent back into society. When he was released in 1879 and inquired for a position at Garden & Company, the owner told him, ""We have no vacancy. Our mill room is full"" (Gilfoyle 47). Even though Appo had experience from making hats at Clinton Prison, it seemed that experience from the penitentiary did not carry over into society. After trying at Garden & Company, Appo applied at Carroll Hat Company and two other hat factories on New York with no success. Defeated and in need of money, Appo resorted back to the opium dens to meet with his old partners and fellow drug addicts (Gilfoyle 47).


It was not until 1894 when Appo had been cast in the play In the Tenderloin where he made honest money for himself. The play incorporated aspects of the life of a criminal which appealed to many people at the time. He was cast because his criminal record gave him celebrity status and he actually had a part written for him specifically (Gilfoyle 91). Appo lived off his earnings from the acting gig and was beginning to venture away from his old life. Although Appo was earning money the honest way from the play, he was being swindled by the producer out of much of his earnings when the play went on the road. The producer, Lederer, refused to give Appo his pay and after consulting a lawyer, Appo decided to give up on ever acquiring the $150 owed to him (Gilfoyle 92). However, after the play had ended, Appo spent some time in another prison on the charge of insanity for stabbing John Atwood, who was fighting with one of Appo's fellow actors, in self-defense (Gilfoyle 93). When he was released, he again began to get sucked into his old life. Appo resorted back to the opium joints as he had nowere else to go and nothing else to do. However, while at an opium joint, something occurred to Appo:

One night while laying in an opium joint at 911 Race Street, smoking the drug, I began to think what a fool I was to go back to the opium pipe after being away from it for so long a time. As I had formed no habit for the drug as yet, I made up my mind to keep away from it entirely before it was too late...if I could break away so easily and so often as I had from the opium habit, why not muster up the nerve enough to break away from the crooked life? I made up my mind to try again to get honest employment and to reform without fear or favor...(Gilfoyle 102-103)"

Appo had had enough of the prison life with its harsh living conditions and the mistreatment of the inmates. He had a taste of an honest life while working on In the Tenderloin and he made up his mind that he would leave his old life behind him and move forward. This led him to eventually becoming an undercover agent for the Society for the Prevention of Crime (Gilfoyle 117). Many of Appo's friends and partners in the grafting business had been either executed or killed on the streets by this time. There was nothing left for him in a life of crime and so becoming a contributing citizen to society was the only option. Appo was one of the lucky ones and he saved himself from his life of crime. 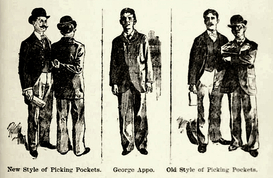