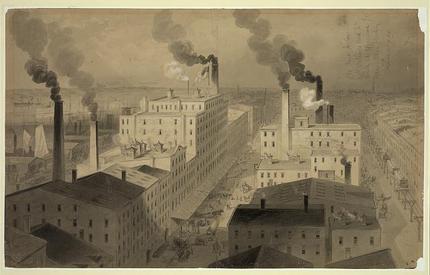 Urbanization was in large made possible by large population growth during the Gilded Age and Progressive Era. Many immigrants from Europe, farmers from rural communities, and businessmen flocked to the cities to seek opportunity. These immigrants and migrates sought employment in the growing factories which were located in the cities. However, opportunity was often not easily accessible to all.

Social Darwinism was an idea that came from Herbert Spencer in the late 1800s . He had adapted this idea from Charles Darwin and his observations of finches in the Galapagos Islands. Social Darwinism is a theory in sociology that individuals or groups achieve advantage over others as the result of genetic or biological superiority. Some of the Industrialists that emulated this theory were Andrew Carnegie and John D. Rockefeller. Industrialists were abundant in this time period and many took full advantage of their higher status in society, making those less fortunate than themselves feel below those few that had climbed to the top of the social pyramid.

Due to all of the immigration to the cities, crowding was a large issue. Tenements were a style of apartment used to accommodate the dramatic increases in population year after year. Skyscrapers became a common sight in the cities due to the overcrowding. Public services were therefore, desperately needed. Sewage and garbage disposal, water works, police and fire stations, street lights and transportation were among the most utilized services. Mass transit such as cable cars and electric street cars were abundant throughout the crowded streets, yet many people still walked to reach their destinations. The layout of the streets was a grid. Streets ran straight at perpendicular and parallel lines to each other. This made transportation, at least for those who decided to walk, easy and quick.

The city was not only a place of opportunity but it was abundant with crime. Pickpocketing, next to homicide, was among the top crimes committed in the cities in the 1800s. Those who were bogged down by Social Darwinism and could not find jobs in the factories resulted to stealing and selling drugs on the crowded streets. George Appo was one of those people who had resorted to a life of crime in New York during the late Nineteenth-Century.